I know that I haven’t posted in ages.  I do however have at least 2 videos to post and finished a couple of cards.  Just for the past month. anything and everything have been nuts.

I had my last CT scan and somehow that just stressed me out to the what ifs.  What if I had to have brain surgery.  If I have to have brain surgery which means I need to get my final affairs in order.  Which means, I am preparing for death.  And I do not want to die.  To be honest, it was hard to concentrate and do things while thinking you are going to die.

Fortunately, good news that scan came out clear.  The bleeding has stopped and the blood is gone.  Which means no more trips to Calgary.  Just have to focus on getting my knee better and my strength back.

Then everyone in this house got sick including myself.  It is hard to do things which you are coughing up a storm.  Oh heck, try sleeping.  I really like to get over this damn cold like yesterday.  Because of this cold, I couldn’t go to my nephew’s birthday party.

I made these bunnies for my boyfriend’s children. Which itself is ironic because I used the same yarn, same pattern, same crochet hook and same hooker and I ended up with 3 different bunnies.  The left one looks like it is from one of those horror movies.  “Killer Bunny From Hell!”

I also ended up buying chocolates for them. And this was before my boyfriend lectured me of how not to spoil them.  In my defence, it was the first time since I was about to leave house and go shopping by myself since the brain injury.  Plus we are talking about chocolate and not to mention, the box of Lindor  Chocolates that I brought for him for Christmas, well . . . . Dad and I kind of ate it already.

I am hoping that they like them.  I still have to finish the monkey.  Where I think I finally got a lead to the yarn.  I hope.

I hope everyone had a good weekend.

I am not sure of how to explain of how I have been feeling lately.  The big part where there are neon arrows pointing to is that I have been sick for the past week.  I have actually stayed in bed for three days, feeling like garbage.

So ok, it is probably perfectly understandable when I say that I am having a hard time getting back into my groove when it comes to cards, yarn and videos.  Maybe I haven’t gotten my full strength back yet?  Right now, it is taking a lot of energy to wiped down my craft table and work on a simple scarf.  That could be it.

So maybe the illness of whatever I was suffering is still lingering?   I honestly have no idea, I am not a doctor.  But if I am still sick, I am going to be seeing a doctor, because this is not helping.  Even though the big craft sale is in November, 4 months away.   It still takes time to make stuff.  I am really hoping to go on a little holiday during the summer and I am not bringing any stuff to work on.

The bad part of being sick is that I let my mind wander.  Wander to new ideas of for the next You Tube videos or what can I sell.  Some ideas are good, while some . . . I am blaming it all on the illness.  Yeah, that bad.

So I am just checking in, to let everyone know of what is happening.  I am planning to have some more to post next time.

I hope everyone is well.

During my many nights of insomnias, I would go on Pinterest for ideas for upcoming projects, crochet and knitting patterns, recipes, and storage ideas.

I found these jars on there which I thought it was awesome.  The ones on Pinterest were pastel colors and these are obviously not.  I just basically used the colors I had in my stash.

But I am going to give you an important tip that you must keep in mind when making these jars.

MEASURE THE JARS BEFORE YOU PAINT THEM!!

As you can guess,  I didn’t.  So the jars I originally planned were to hold my brushes and knitting needles.  Well they do not fit.

Fortunately, my niece decorated a plastic jar at her school and gave it to me a few Christmas ago.  That was one of the best Christmas gifts I ever received that year.  That little jar hold my paint brushes perfectly.  As for my knitting needles, I am just going to keep them in a base, a purple one by the way.

I am not too disappointment at the results, in fact, I really liked them.

They were quite easy to do.

And boom, you are done.  The only hard part was the drying time.  As you know of what my patience is like when it comes to drying time.

I hope everyone had a good weekend.

I assumed that my last post was in May, not March.  Opps.  Once again, I can make flimsy excuses saying that my computer had a bug, then I had one.  Or I finally got down and dirty and cleaned up my work space.  I am still cleaning, but I got about half done.  I threw out and donate a great chunk of out.  Donate as I gave it to my friend J.  I mentioned it to my boyfriend and he wondered if she would be so grateful that she would kiss me on the lips.  Pervert.  And no, she didn’t, she hugged me.

I still have several more canvas boxes to sort out.  Which I am kind of dragging my feet.  When I go through them, I find things that I haven’t used in 5 years and have no intention of using.  So why I am keeping them?  Get rid of them and make stuff for the new toys.

Except that little voice in my head is telling me, “It’s so pretty.”

De-cluttering  is definitely a battle between the brain and the heart.

And of course, it doesn’t help with the weather being so hot with the temperatures reaching 32.  And of course, our air conditioner dies.  Good news is now working, which means I can’t be on my computer because as you know, it blows cold air at me, drying out my eyes and giving me an ear ache.

I am still working on the Cheap Art Challenge which is giving me a run for my money.  I honestly thought that this was going to be a simple, and relaxing challenge.  Oh hell no.

My first attempts got wreck because of the supplies.  And here am I rooting for cheap supplies, saying it is the skill, not the supplies that make you an artist.  Third one, I spilled paint water all over it.  I am not giving up on it, but at the same time, I feel like I am hitting my head against the brick wall.

I know the big reason is the subject that I am using a photo from someone I admired.  And he see the works which it is kind of adding more pressure to me.  I know, he has no intention to do that and he is ok if I don’t use his photo.

But I did finally finish this mini elephant photo album. 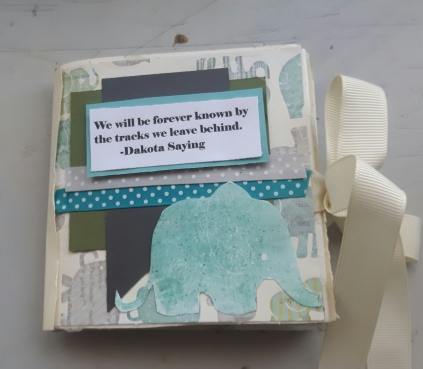 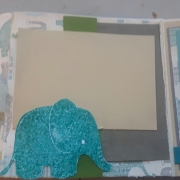 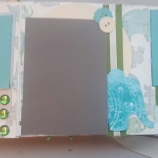 There is some good news, my boyfriend’s child is finally out of the hospital and doing good.  In fact, she is being a little devil, (in a good way).  When she was released, I was in the middle of 3 deadlines where I told him that I didn’t have time to spend with him.  She found out and asked if that means that he get to spend more time with her and her sisters.  That little sneak.

There is more.   I gave her a get well package which included this.  Thank goodness, my friend J was a former nurse which was a tremulous help in this, telling me of what was accept and not accept in hospitals. 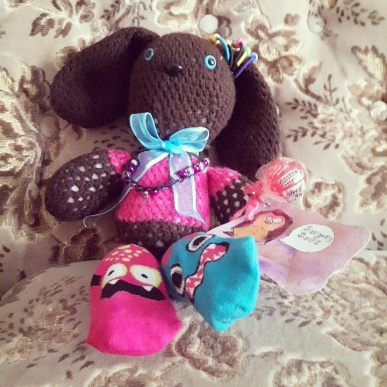 Her sister saw it and asked my boyfriend if I can make her a monkey.  And of course, he said yes.  And the way he asked was strange.  We were talking and he said “(Name) like monkeys.”  And then I said, “Of course, they are a lot easier to take care than elephants.”  A few seconds later, I asked him, “Am I missing something?”  That is when he told me about that she wanted me to make her a monkey.  It is coming along slowly, except I ran into the nightmare that every crocheter and knitter fears.

I ran out of yarn.  I went to several stores trying to find that shade of brown.  I found it online, but I don’t have a credit card.   My boyfriend told me that he will take care of it, and until I get the yarn, there is nothing else I can do.

I guess that is all.  I hope everyone is well and at peace.

Have you ever had a project where you are almost done? Almost as you need to do one more thing before you can call it done? And even though, that thing is so small, completing it feels like you are climbing Mount St. Helen?

That is what is happening to me right now. The cowls are done. And I’m thinking that I need to start looking for mannequins for my models.

I even knitted and crochet a swatch for each so the person can test it in her washer first.  I made a couple of cute tags.  Everything is done.  The last step is deliever and right now, I feel like I am climbing a mountain.

I wish I could say it is weather or the roads are bad.  That is why the delievery is delay.  That sound reasonable, right?  It has nothing to do the weather.  It is became my cell phone needs a new battery and the store does not have it in stock and it is on order.

I know it sounds weird.  The person who had order it lives outside of town.  And if I run into trouble like going in a ditch or getting lost (whic is most likely going to happen), I’m in deep doggy do.  Because I will not have cell phone to call for help.

The funny thing is that I remembered a time where I didn’t have a cell phone or wasn’t so depended on them.  And I am not a technology kind of gal.  I prefer using pen and paper instead of a computer.  The only games I play online are solitare or the Smurfs.  In fact, some of the games, give me motion sickness (I don’t know why that happens).

Now I feel like I am going through “Cell Phone Withdrawl”.  When did this happen?  When did I become addicted to my cell?  I thought my yarn addiction was bad.